In 1979 Michael Porter wrote an article that was published in the Harvard Business Review, entitled, “How Competitive Forces Shape Strategy.” He subsequently published an expanded discussion on this in a published work in 1981.

Porter proposed that the competitive environment can be analyzed through a five factor categorization (rivalry amongst existing competitors, threat of new entrants, etc. – see below) and suggested that companies respond in one of three ways – cost leadership; differentiation from competitors; or focus on market segment(s). 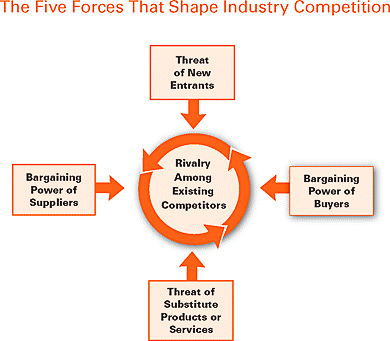 The Harvard Business Review published Mr. Porter’s revisit to the subject in its January 2008 edition, entitled, “The Five Competitive Forces That Shape Strategy.” A link to a thirteen minute online video of Porter describing his updated article is available here.